Counting Quintuplets and Other Large or Irregular Note Divisions

While subdividing can always present challenges, both mentally as well as physically in our playing, encountering large and/or irregular note divisions in our pieces can be particularly daunting.

Or this line from the first movement of Samuel Barber's Concerto for Violin and Orchestra, Op. 14.:

Many of us might just assume it's fast anyway and approach the runs by just playing as fast as possible, hoping for the best. Basically just freaking out. Unfortunately, this approach divorces our playing from the rhythmic framework that with practice builds our playing security, not to mention our thoughtful and artistic phrasing choices.

Before I lay out a practical way to approach each tuplet (irregular note division) and large note division we might encounter, let's define a few necessary terms:

Quintuplets: Played as five notes divided evenly to fit the span of one beat in simple meter, quintuplets move slightly faster than sixteenth notes. In compound meter, like 6/8, the five notes might span three eighth notes, moving significantly faster than triplets, but not quite as fast as sixteenth notes. Like all other tuplets, the notes are typically beamed together as their next closest note value relative (8th, 16th, or 32nd notes) and labeled with an italicized number to indicate the subdivision (in this case a "5"). 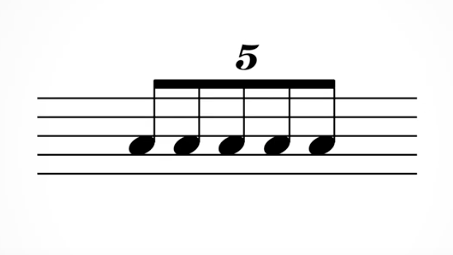 If your head is already spinning, an easy approach is to simply choose a five syllable word, set the metronome beat in which you'd like to fit the quintuplet, and practice chanting that word with the beat. Just as we might subdivide and count the common subdivision of four 16th notes using "1 e & a," or "Mi-ssi-ssi-ppi," or "Huck-le-be-rry," for our quintuplets, we might try "A-bra-ca-da-bra" or "Hi-ppo-po-ta-mus." Simply fit either word into the span of a beat or whatever timeframe intended and you're set.

Sextuplets: Played as six notes divided evenly to fit the span of one beat in simple meter, sextuplets move faster than sixteenth notes but not as fast as 32nd notes. In compound meter, like 6/8, the six notes are a normal subdivision for the time signature and notated as 16th notes, though we can still use the counting method below.

When sextuplets are meant to be phrased as two triplets, with stress on the first and fourth notes of the run, "Beau-ti-ful El-e-phant" or "Ri-ver-boat Ri-ver-boat" are easy phrases to capture this subdivision. If the sextuplet needs to be phrased evenly, or as three sets of two, "Al-ways Play Them E-ven" works nicely.

Septuplets: Played as seven notes divided evenly to fit the span of one beat in simple meter, sextuplets move quite a bit faster than sixteenth notes but not as fast as 32nd notes. They might also be found fitting the span of four beats in 4/4 and therefore moving slightly slower than eighth notes. We might also find septuplets in compound meter, perhaps as seven notes fitting the span of three eighth notes in a time signature like 6/8 and moving a bit faster than 16th notes.

Again, that's all very confusing, and even more confusing when the notes are meant to be phrased evenly verses as a group of 3 notes then 4 (or vice versa). In each of these scenarios, the phrase "Mi-ssi-ssi-ppi Ri-ver-boat" is a useful tool to memorize. It can be played evenly (like if you were to speak in a monotone voice), or stressing the "M" and "R" to emphasize groups of 4 then 3. Likewise, the words can be reversed into "Ri-ver-boat Mi-ssi-ssi-ppi" for instances where we need notes grouped as 3 then 4.

In any case, Mary Poppins will come to our rescue! We can simply chant "Su-per-ca-li-fra-gil-is-tic" over whatever timeframe we need to fit in our eight notes. We usually phrase runs of eight either as two groups of four or four groups of two. Either way, Supercalifragilistic works!

Nontuplets and beyond: Played as nine notes divided evenly to fit the span of one beat in simple meter, nontuplets move a bit faster than 32nd notes but not quite as fast as 64th notes. In compound meter we might also find them fitting the span of three eighth notes or even an entire measure in a key signature such as 6/8.

With nontuplets, and any groupings of up to 14 notes, Mary Poppins continues to help. We can simply use as many syllables as we need of "Su-per-ca-li-fra-gil-is-tic-ex-pi-a·-li-do-cious" and find our way. Who knew!

Whew! It's still a lot to process, but now we have a method.

With any strange subdivision, or any rhythm you're struggling with for that matter, it's best to start your practice with vocalizing the division along with a metronome beat or drum track. Once you can chant the rhythm or subdivision confidently with a beat, try playing it on open strings, paying attention to the amount of bow and bowing mechanics necessary to create a tight rhythm. Next, include the left hand fingerings found in your piece, but at a slow enough tempo to maintain the correct subdivision or rhythm. Once you've successfully mastered all of these steps you're finally ready to start to take your phrase up to speed!

How Do I Get Out of Pain? - Playing Health in the Spotlight

Please email Laurel at laurel@laurelthomsen.com if you have a violin, viola, fiddle, music biz, or practice related question you’d like answered in the blog or on a podcast, have a story or insight to share, or if you’d like to inquire about violin, viola, or fiddle lessons with Laurel, in-person or via Skype, FaceTime, or Zoom.

The Violin Geek Blog is a free resource and always will be. We also don't sell advertising, meaning that what you read is a labor of love. If you'd like to support Laurel Thomsen's efforts and help ensure they continue, please consider making a donation. Thanks for your support!

Join Laurel's periodic newsletter and be the first to learn about her adventures, music, tour dates, and new recordings. On occasion we'll also offer mailing list only downloads and discounts.
© 1996-2022 Laurel Thomsen, Email me
New album out now!